Hundreds of people today joined Kashmiri Pandits in their protest at Jantar Mantar today. The protestors belonging to all age groups and shades of life assembled in huge numbers and demanded that government take measures to punish the perpetrators of genocide, move away from tokenism and pass the genocide bill immediately.

Speaking to the press, Sumeer Chrungoo, President, Kashmir Samiti Delhi, said that if the government is really serious about the return of Kashmiri Pandits, than first and foremost thing it has to do is to recognise that Kashmiri Pandits are a the victims of genocide. 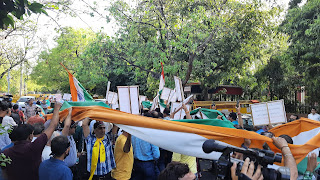 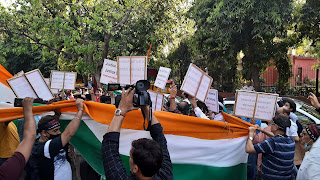 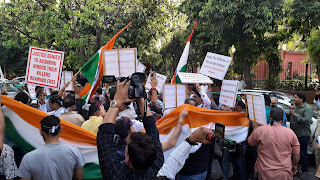 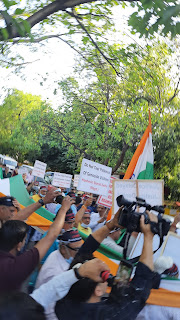 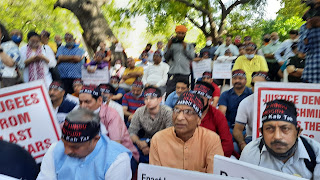 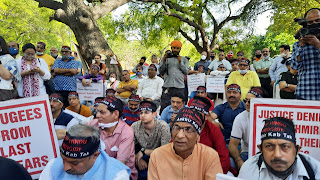 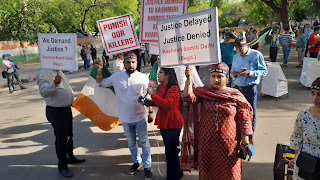 leading the group of youngsters wanted that the judiciary immediately act on the petition filed a Kashmiri Pandits to fast track the cases of killings and form an SIT. He said "any delay in justice weakens the faith of youngsters in the justice delivery system and mechanism"

Shilpi, a young student, who along with her friends had flown all the way from Mumbai to be part of the protest said that the happenings in Kashmir is an eye opening for all and if we don't punish the perpators, it will embolden the anti-India and jihadi forces to replicate the same across India.

Kashi Ram, a poor labourer and a rickshaw puller, had decided to forego his daily wage to be part of the protest and show solidarity with his fellow Indians and Hindu brothers.

Jahangir, a 40 year old Kashmiri Muslim, who was part of the protest said that "Kashmiri Muslims have also suffered in the hands of militants. Jihadis used our mosques against Pandits, commited heinous crimes against them. The truth is that our mosques, our relatives, our friends were spewing venom against the Kashmiri Pandit community and we were mute spectators in agreement to the genocide that was being committed. Our own people should have stood  up. I know Jagmohan theory is a lie and therefore today I came to support the Pandits."

The key demands of the protestors were

1. Recognise that Kashmiri Hindus are victim of genocide

2. Form Genocide Commission to fast track the cases and identify the perpetrators of genocide

4. Create 'One Place Settlement in Kashmir "in line with Panun Kashmir Resolution of 1991.'

The protestors carrying placards and banners raised slogans in favour of these demands.

Posted by Amit Raina at 1:32 PM No comments:

Posted by Amit Raina at 1:21 PM No comments:

Posted by Amit Raina at 1:20 PM No comments:

Posted by Amit Raina at 1:18 PM No comments:

Posted by Amit Raina at 1:17 PM No comments:

Posted by Amit Raina at 1:15 PM No comments:

A KP BOY IN A REFUGEE CAMP

Drop in mail with your suggestions, queries and help at rootsinkashmir@outlook.com 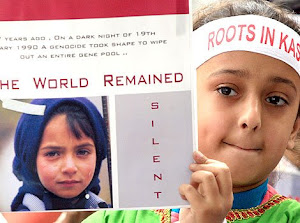 Even this little boy wasn't spared 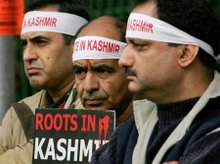 The Terrorists - Killers of Kashmiri Hindus 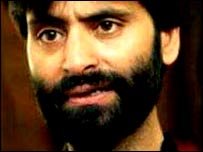 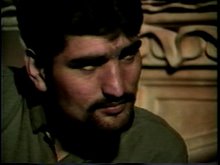 WHERE ARE HIS KILLERS? 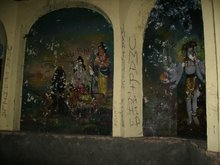